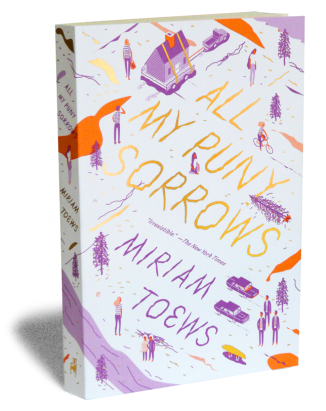 Design and Illustration by Sunra Thompson, Courtesy of McSweeny’s Publishing

If you’re fortunate enough to have been one of my victims over the past few months, you’ll already be aware that I’ve been occupying my time with an incessant rampage of recommending All My Puny Sorrows by Miriam Toews to anything with eyeballs and a pulse.

Every now and then, I’ll read a book so magnificently heartbreaking that it seems like the only logical response is to—with tears of hope in my eyes—vehemently campaign for its author’s ascendance to the presidency. And given the current political climate in the US, electing Toews president seems like just the kind of radical intervention we need. (Toews—pronounced “Taves”—is, to the detriment of my cause, Canadian, but I’m sure we can work something out.)

My infatuation with All My Puny Sorrows began (apropos to BFR Managing Editor Clare Suffern’s recent blog post) with the cover. Upon completing an internship with McSweeney’s Publishing in San Francisco last spring, I was given free rein to choose a stack of their titles from the bookshelves—titles I had eyed covetously each time I walked through the office. If I were to take the liberty of claiming the existence of a core tenet for some sort of underlying philosophy universal to the team at McSweeney’s, it would be that books, with all their potential to be beautiful, should invariably be just that: beautiful, in everything from content to cover design, typography to spine width, and even the type of paper used in printing. And to me, the paperback edition of All My Puny Sorrows represents the pinnacle of McSweeney’s adherence to beautiful design, so last spring, I knew exactly which book to pull off the shelf first.

The cover—designed by the brilliant Sunra Thompson—depicts a bird’s-eye view of a landscape composed of pastel oranges, purples, and metallic gold accents. Scattered throughout this landscape are tiny, stylized humans going about their various enterprises. Closer inspection reveals that this landscape transcends temporal boundaries, for each orange-skinned figure represents a character from the novel; those two boys carrying a golden kayak, those imposing men in suits and ties standing outside their cars, the two old women arm-in-arm looking out over the river—all of these human miniatures receive hands and facial features over the course of the novel.

Thompson depicts the novel’s two main characters, sisters Yolandi (striped shirt, light hair) and Elfrieda (white shirt, dark hair), multiple times on the cover. Elf is depicted in various positions with slouched posture, hiding, it seems, underneath her cascade of dark hair, and she never has anything in her hands. Yoli, by contrast, is drawn in motion, holding a grocery bag or riding a bicycle. The one instance of Yoli standing still with nothing in her hands features her in the lower left corner, arms slung straight at her sides, looking back on the title of the book and the surrounding landscape. Something about the squiggly font of the title, the scraggly branches of the purple trees dotting the landscape, these handless orange humans all enmeshed in their own toils and ruminations—it all betrays an undercurrent of melancholy and existential dread, yet simultaneously communicates an air of bewilderment. So as viewers, before even acquiring an inkling of what the novel is about, we are inclined to empathize with Yoli in the lower left corner as she looks back and tries to make sense of this beautiful, forlorn landscape and her slouched, despondent sister sitting in the center of the title. By nailing this balance between absurdity and despair, the cover serves as a visual taste-test of the most striking aspect of Toews’ fiction: her use of humor as a gateway into difficult material.

At this point, it would be useful for readers to acquire the aforementioned inkling of what this book is about, so I’ll steal from the back cover: “When Elf, a world-renowned concert pianist, attempts suicide just before an international tour, her sister Yoli must keep their family from falling apart while facing a profound question: what do you do for a loved one who truly wants to die?”

With what wisp of a plot there is revolving around a hospital bed and a family member’s sincere wish to die, it’s easy to wonder how this book could be anything but depressing. But thanks to Toews’ keen imagination and knack for self-deprecation, the novel’s frequent bouts of humor serve as a kind of old-fashioned scuba suit for readers to slip on before diving into subject matter perhaps otherwise too suffocatingly tragic.

One instance of such humor (taken from a long list in my phone of page numbers on which this book made me laugh or cry) comes at a point in the novel when Yoli is visiting Elf in the hospital, away from her kids in Toronto, and grappling with the question of whether or not to help her sister access legally assisted suicide in Switzerland. She receives a call from a man with whom she is loosely romantically involved back in Toronto. He asks if there is anything he can do for her. Yoli replies: “I asked him to drive past my apartment in Toronto and see if there were signs of life from Nora and Will and maybe he could knock on the door and ask them if they were okay and why Nora wasn’t answering her phone. Although I already knew why. It was because she had poisoned Will and dragged his body into a closet and was having unprotected sex all over the house with her fifteen-year-old Swedish dancer boyfriend and she didn’t have the time or inclination to talk to her sad old disapproving mother in the midst of it all. Consider it done, he said.”

In an interview for The Guardian, Toews said of her choice to bring so much humor into the equation: “I wanted people to not be afraid of the subject matter, to get the tone right, right off the top, and get the readers’ trust, so we could come out together in some other, less dark place.”

A natural concern with such a strategy is that the comedic moments might, in some way, diminish the legitimacy or forcefulness of a story’s sorrow. In my own writing, I know that a particular sadness can feel so precious that to juxtapose it with humor would be to fail in giving it a faithful representation. However, when done well (and it is hard to do well—thank god we have writers like Miriam Toews), moments of comic relief can, curiously, have the opposite effect. Rather than diminish it, these moments can actually amplify the reader’s experience of a story’s sadness. In reading All My Puny Sorrows, we get the sense that the characters—particularly Yoli—are utilizing humor as a defense against tragedy; by surrendering themselves to the bafflement of navigating human sorrow, they refuse to let it break them. The characters then feel more human and relatable, which makes us feel the weight of their grief all the more.

Another writer (featured in our most recent issue of BFR) who toes this line between tragedy and comedy well is Jonathan Plombon in his gloriously titled short story “Dismantling Modern Residential Architecture Inside the Patriarchal Family Structure: A Proper, Expedited Disposal Technique of a Broken Home and Its Contents, for Fathers Who Have Somewhere Better to Be and Couldn’t Give a Damn, Anyway.” Across twenty-six short (and equally gloriously) individually-titled segments, Plombon’s narrator details a childhood spent in a broken home and a subsequent encounter with a mysterious plant-woman. Unlike Toews, however, Plombon’s humor relies largely on surrealist exaggerations and clever twists on familiar phrases. In section seventeen— “Babies and Ladders Don’t Come with Instruction Manuals”—the narrator exclaims: “I wanted my mother to use me as a crutch… She never clung to my arm, but I detached mine anyway, tying it together with crutches, bars, stools, and a strange man’s shoulders.” The tone of the story is removed from the narrator’s internal strife—emotionless, almost—so somehow this image of him taking off his arm and tying it up in an absurd contraption to prop up his mother impacts the reader even more (and by “the reader,” I mean me).

So what to do with all this? Pick up a copy of All My Puny Sorrows. Pick up a copy of BFR. Let Toews and Plombon slice you open then stitch you back together. Write your own magical-realist tragicomic story about a country-bumpkin-turned-city-slicker old man who wants only to look upon his childhood farm once more but can’t, for the life of him, remember where he misplaced the cord to his rechargeable eyeballs. The world is your miserable, hysterically laughing oyster.